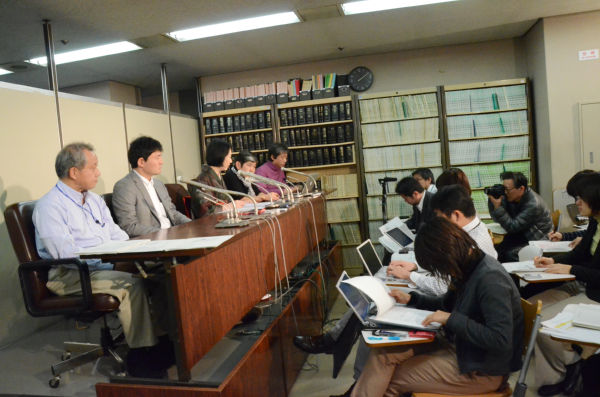 Citizens Group Accuses The Prosecutors Over The Rikuzankai Case

The charges are as follows:

(1). Construction company officials testified to the prosecutors that
they did not make any illegal donations to Congressman Ichiro Ozawa,
indicating his possible innocence. However, the prosecutors did not
submit written statements of these hearings to the Prosecution Inquest
Committee although they had to. This act is considered a fraudulent
obstruction of business
(Penal Code 233).

(2). The written statement taken from Congressman Tomohiro Ishikawa, a
former secretary of Mr. Ozawa, states that after hearing the
prosecuter preach on how lying on the behalf of a superior is
yakuza-like and a betrayal to the supporters, Mr. Ishikawa finally
admitted falsifying political fund reports under Mr. Ozawa’s approval.
However, it turned out that this written statement was fabricated by
Prosecutor Masahiro Tashiro, after Mr. Ishikawa’s secret recording of
his conversation with Mr. Tashiro was presented at the court. Mr.
Tashiro’s act is against Penal Code 156 and 158.

Deliberately or not, the Tokyo District Public Prosecutors Office
Special Investigation Division did not submit written statements
indicating Mr. Ozawa’s possible innocence to the Prosecution Inquest
Committee. Instead, they submitted the aforementioned fabricated
statement written by Mr. Tashiro, and it is believed that, as a result, Mr. Ozawa wasindicted by the Prosecution Inquest Committee.

Moreover, there is a suggestion that the members of the Prosecution
Inquest Committee were selected using an intentionally glitched voting
machine which is designed only to select socially inexperienced young
people.

What’s even more surprising is that the Prosecution Inquest
Committee’s hired lawyer, in the position of giving advices to the
committee members on whether to indict or not, was replaced by another
lawyer who is said to be affiliated with opponent politicians of Mr.
Ozawa.

The Citizens Group Raising Voices To Defend The Constitution has
conducted a tremendous amount of research, proving how desperately the
people behind the Prosecution Inquest Committee were trying to indict Mr. Ozawa.

It seems that the judicial and the administrative powers these days
don’t even hesitate to bend rules and laws if that’s what it takes to
get rid of political figures they target.

Well, let’s see if the Supreme Public Prosecutors Office has the
courage to press charges against it’s subsidiary organization. Nobuyo
Yagi, the representative of the Citizens Group Raising Voices To
Defend The Constitution, stated that she hopes that the Prosecutors
Office is functional enough to clean up it’s own act, and live under
rules and laws.